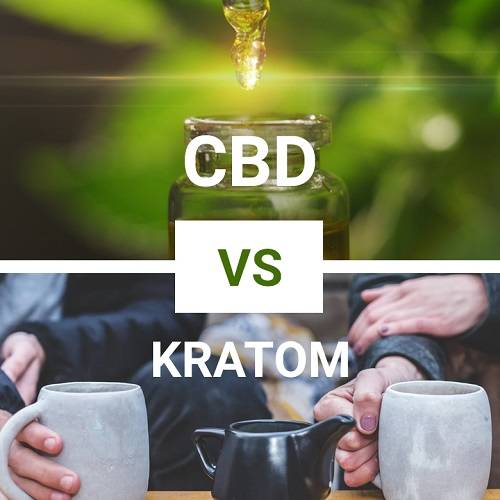 With a noticeable shift away from traditional medicines, people across the globe are embracing the use of CBD and Kratom in a welcoming manner.

May it is the costly nature of prescription medicines, the inefficacy of traditional treatments, or the anecdotal plus scientific backing for the use of Kratom and CBD, the world is moving towards a new normal.

Which option is best for you?

What should you do when you see those flashy ads “CBD oil for sale 50% off” or “Extra strong Kratom, buy one get one free”?

Those are some common questions that people ask in online forums and peer groups.

Today we will try to provide you with a variety of information related to these two items so that you can independently conclude about what would work best in your case.

Puzzled between CBD and Kratom?

CBD enjoys a higher level of popularity and accessibility as compared to its Kratom counterpart.

But both are advocated for similar reasons ranging from pain relief to anxiety management. Let’s take a closer look at these popular plant derivatives.

CBD, short for Cannabinoid, is a non-psychoactive compound present in the cannabis plant. It has impressive medicinal and therapeutic properties, which makes it an excellent choice for everything medical.

Meanwhile, Kratom is a relatively lesser-known natural herb, which is predominantly found in the South-East Asian countries, such as Thailand and Malaysia.

7-HMG (7-hydroxy mitragynine) and mitragynine are the primary active ingredients present in Kratom, and they are termed as alkaloid compounds that are close to the ones found in opium poppy.

It should be noted that kratom doesn’t fall under the category of an opiate because of its milder outlook.

Of the two active ingredients, 7-HMG is deemed responsible for the psychoactive effects whereas mitragynine channels the therapeutic effects.

Kratom has compounds that interact with the body’s opioid receptor, which binds itself to the said receptors to induce a biological response.

In this sense, it carries the risk of addiction, but the effect is less severe than other illicit drugs.

Best Option For You?

To really make an informed decision between Kratom and CBD, it serves well to understand the differences between the two plant-based compounds.

Both Kratom and CBD are sought for the purpose of regular pain management. CBD has been forwarded as a possible option to relieve arthritis pain. It was also found to be beneficial against inflammation pain.

Moreover, a review article suggested that CBD can be used for chronic pain management.

Moving back to Kratom, it is interesting to observe that the lack of research on this natural herb does not translate to an ineffective pain management tool.

In fact, a review article in 2017 stated that Kratom can help to address three important issues:

Similarly, anecdotal has pointed favorably towards Kratom for pain relief.

A survey study conducted by Pain News Network came with a whopping 90% approval rate with a study size of 6,150 kratom users where they unequivocally termed the drug as very effective in treating chronic pain.

CBD does not induce any psychoactive effects in its users. Particularly in the US where the hemp-produced CBD contains less than 0.3% THC, you can be certain of not experiencing any cerebral alterations that could make you drowsy and heavy-headed.

You also have the option of buying CBD Isolate, which only consists of pure CBD components of the cannabis plant without the presence of terpenes and other chemicals.

On the flipside, Kratom doesn’t enjoy a similar no-high status due to the presence of psychotropic ingredients such as 7-HMG, which not only causes a high but also raises the addiction level.

A survey study in 2014 determined that users having over 6 months of association with Kratom reported dependence, withdrawal, and cravings. Therefore, the issue of addiction is ever-present in the prolonged consumption of Kratom.

CBD enjoys a popular status in the medical fraternity in terms of the relevant research and studies conducted to determine the effects and efficacy of CBD.

On the contrary, Kratom does not get that much spotlight, which makes it an under-researched herb. Most of the evidence is anecdotal with negligible scientific proof.

Although CBD does not have significant side-effects, Kratom suffers from a variety of issues. The reported negative consequences for CBD are usually trivial and temporary. Some of them are listed below:

On the contrary, Kratom contains alkaloids that have the potential of a strong physical impact over the user’s body.

The reason is that it contains alkaloids at a similar level to that of opium and other addictive drugs. Dependence over Kratom can lead to the following issues:

Unlike CBD, Kratom is not regulated by the Food Department Administration (FDA). This leads to a questionable level of efficiency and authenticity of this herbal drug.

Is Kratom Worth It?

You might be wondering that the list of positives for Kratom seems short as compared to CBD. What’s the fuss about anyway?

Well, Kratom has one great advantage over many other drugs, which is also one of its biggest benefits: treatment for opioid addiction.

Just as E-cigarettes were proven to be 95% less harmful than traditional tobacco cigarettes, Kratom is also remarked as having the potential to reduce opioid abuse.

Because of its function similar to other illicit drugs, but with a much milder and better outlook, Kratom is viewed as a favorable alternative.

What about Gummies? CBD Gummies vs Kratom Gummies

Regardless of what interests you, both Kratom and CBD are available for your consumption. Interestingly, you can get either of them in the form of gummies!

In the second decade of the 21st century, you simply can’t miss out on gummies for a variety of reasons!

Let’s explore both these types of gummies and what they are made of!

This one’s a classic!

Many people prefer eating CBD-infused gummies because not only is it loaded with CBD, but it also tastes delicious.

The ingredients in the CBD gummies can vary greatly.

For starters, you can expect to have either Full-spectrum CBD or CBD Isolate. Then you can encounter high fructose corn syrup, which is not a nice ingredient to have.

An ideal CBD gummy will consist of the following:

You can also opt for CBD gummies that provide other beneficial items such as vitamins and herbs.

Kratom is not far behind either.

Even though the primary focus is usually on CBD, but manufacturers have also created Kratom Gummies, which is at par CBD gummies.

Usually, Kratom Gummies consist of Full Spectrum Kratom Extract. The intensity and potency of the gummy depend on how much Kratom is packed inside it.

In case you wish to know the recipe and the ingredients of a Kratom gummy, we have got you covered.

You will need the following:

Simply, mix the Kratom powder and Gelatin powder in the boiled water. Once the extract is ready, you can add in the fruit flavor, and stir it.

After it is well-mixed, spread the liquid solution on a tray and leave at room temperature as that will make the jelly defined.

Finally, store in an airtight jar and keep in the refrigerator for freshness and flavor enhancement.

Taking CBD and Kratom Together?

Can there be a greater synergy through the combination of CBD and Kratom? Or will it be counterproductive?

Online forums offer tried and tested as well as flawed advice in this regard. A renowned method that forwards the idea of embracing CBD and Kratom is called KFC.

Similar to its name, it actually involves the intake of food between using Kratom and consuming CBD.

KFC is an acronym for Kratom, Food, and CBD, where the user follows the KFC order to ensure that there are no adverse side effects after using these two organic medicines.

However, most of the suggestions are not substantiated by empirical evidence and it is recommended to not take these two products together if you are just starting out.

The answer is both simple and complicated.
It is like comparing an apple with an orange.

CBD has extensive research backing, a dedicated medical fraternity, a legal cover along with state and federal level intervention, and finally, a lot more usage and awareness across the globe.

Kratom has none of these. Even though it dates as far back as cannabis, the talk about this herb is still at an embryonic stage.

With a limited research outlook, which is mostly survey-based, it can make you tilt towards CBD, and we would not be shocked.

But one thing is for sure: Kratom has not been canceled as a natural herb. It may have a lot more to offer and only time will tell its true medical potential.