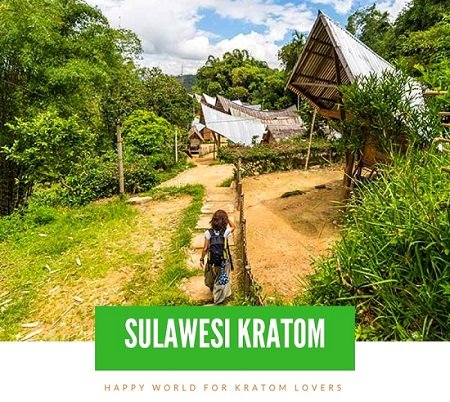 Tired of all the Kratom blends that we have been seeing and buying for the past 20 years or more? If yes, then this is time to experience a new blend of Kratom, the Sulawesi Kratom.

Traditionally most of the Kratom strains are named after the place from where they are originated. Usually, the familiar strains were derived from Islands like Borneo, Sumatra, and Bali, with some originating from islands of Thailand and Malaysia. This particular strain that we are talking about is derived from Sulawesi Island.

Sulawesi is an island located in Indonesia. It is the world’s eleventh-largest Island, consisting of four peninsulas, separated by three gulfs. The word Sulawesi is derived from Sula-besi which means iron island. Historically, Iron deposits were exported from Lake Matano running through the island, which is why this island bears the name Sulawesi. It is said that the Portuguese explorers gave this name to the island.

The terrain of the Island is mountainous with areas of flat regions and lakes and some volcanoes. The environment of the island is favorable for the cultivation of plants and trees and especially Kratom.

The rainforests within the island mainly are a safe harbor for the cultivation of Kratom. The climate is warm and humid with plenty of rainfalls that aids in the growth of the Kratom plant. With the flourishing business of Kratom in Sulawesi Island, tourism to this area has grown exponentially.

Previously, only certain Islands used to cultivate and produce Kratom, but then gradually farmers started experimenting in other regions of the world. One such experiment was growing Kratom in Sulawesi, which turned out to be a significant success.

Sulawesi Kratom rapidly gained popularity in different parts of the world especially the US where it is exported in bulk. The business of Kratom flourished on Sulawesi island, and most of the people now know this island for the Kratom it ships.

The Sulawesi blend of Kratom can be considered unique in the sense that it is grown in a different region of Indonesia and not the traditional islands.

The terrain and environment vary from island to island so can experience some uniqueness in this blend of Kratom. However, most of the properties of Sulawesi Kratom are similar to that of all other types of Kratom.

Grown in the rainforests of Sulawesi, this Kratom comes in the usual three strains, the red, green and white Kratom. The leaves of Kratom plant are dried and then processed to make Kratom powder, blend, tincture or extract.

For those Kratom lovers, who want to experience an aromatic and unique Kratom strain, we suggest that you add Sulawesi Kratom to your shopping list.

The red strain of Sulawesi Kratom is stimulating, the White strain is relaxing, while the Green Sulawesi has intermediate effects.

Sulawesi Yellow Kratom is a new blend that has a slow onset but a prolonged duration of action, and it is more relaxing than stimulating.

Sulawesi Kratom can be taken in any of the forms in which the other strains of Kratom are taken. You can either take the powder form with water or preferably grapefruit juice. It can also be taken in the form of tea or capsules. You can mix the powder with any eatable to make the taste bearable. The tincture and extract of various types of Sulawesi Kratom are available with some vendors.

People have been using Sulawesi Kratom for the management of chronic pain, anxiety disorders, depression, stress disorders, and for relaxation of the body and mind.

Red Sulawesi Kratom is an energetic strain that causes stimulation even at mild doses. At higher doses, it acts as a sedative.

On the other hand, the Sulawesi White Kratom is more calming and soothing. It relaxes the muscles and allows one to be stress-free. It also helps in the management of pain, but it is less potent than the red strains of Sulawesi Kratom.

Green and Yellow/Gold Sulawesi strains are also viral Sulawesi strains that are used for relieving pain and evoking relaxation. Sulawesi Kratom, depending on its type can be taken in various doses/capsules.

Depending on the dose, Sulawesi Kratom produces variable effects. It is recommended though that you start taking a low dose of Sulawesi Kratom to avoid any potential side effects. Also, alternate it with the other types of Kratom to prevent building up a tolerance or the stagnant strain syndrome.

People have been sending positive reviews about Sulawesi Kratom. Some users are so fascinated by this strain that they have been reordering. They have loved the effects of this particular Kratom. Though just like other blends, this strain has the same Mitragynine that is considered more potent by users. Users are particularly fond of Sulawesi Maeng Da. They find it very stimulating and energetic.

Though most of the users are highly satisfied with the effects produced by Sulawesi Kratom, some are highly disappointed because they have encountered some scam vendors. Therefore, it is highly essential that you buy Sulawesi Kratom from legit vendors like Kratom OG, Legit Kratom, Kratom Sulawesi, The Kratom Syndicate, etc. These vendors are reliable, customer friendly and promptly reply to emails and inquiries. Most importantly they deliver packages within days of order, and the packaging is very compact and safe.

With the advent of new Kratom strains in different regions of Indonesia, farmers are trying to extend their cultivation outside to reduce the cost of shipping and taxation from Indonesia to other parts of the world.

Soon we will hear the arrival of Kratom in the USA, which means that Kratom cultivation will extend to the areas where it is exported now. This also means that there will be a new array of Kratom strains and more choices for the users. Sulawesi Kratom has opened a new world to Kratom users, and we believe it is a happy world for Kratom lovers.