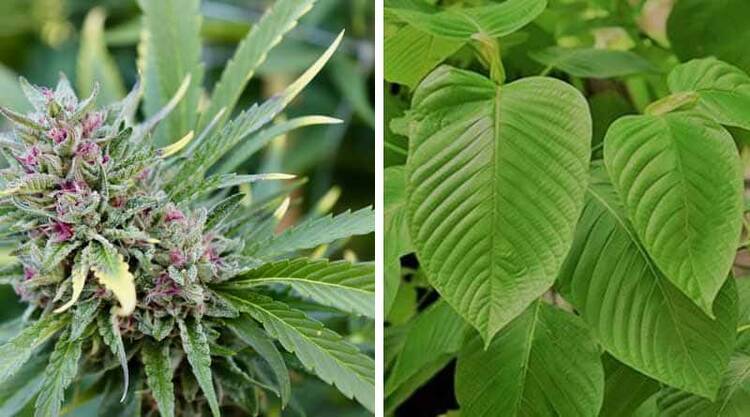 People who use kratom or marijuana often claim effects that are unknown to many! While scientists are gradually collecting evidence, we can walk through the information we have to understand what each of these organic substances can do for us.

Many potential users begin to show interest in kratom and marijuana by asking if they are similar. And eventually, the question arises, is marijuana better than kratom? Or vice versa? Let’s understand each botanical to see how they benefit users.

The Origins Of Both Botanicals

Kratom is an evergreen tree native to Southeast Asian countries like Indonesia, Malaysia, and Thailand. The leaves of this tree are used in various kratom products. The kratom plant is rich in alkaloids, and the various strains have unique alkaloid content, which makes them suitable for people who prefer stronger or milder kratom effects.

Marijuana is a shrub that can grow in the temperate, warm climate and also bears flowers. The leaves, stems, and flowers are all used for various products as the cannabinoids in each part of the plant are potent with various benefits for health.

Kratom may be new to you, but it has been in use for centuries. Found in the jungles of Indonesia and neighboring countries, this plant was believed to have analgesic properties and was a traditional medicine for centuries.

Now, it has been discovered as a natural substance enriched with alkaloids that improve focus, positivity and energize users. The alkaloids Mitragynine and 7-Hydroxy Mitragynine are moods enhancing and sedating, respectively. The use of kratom in large doses can make you feel soothed and relaxed, while a moderate amount can invigorate your senses.

Similarly, marijuana was considered a relaxing and pain-relieving botanical used for both medical and recreational purposes in olden times. Weed or marijuana is still used by people who claim it helps with chronic pain and anxiety. However, a large dose of this substance can move your focus and give you starry eyes. Don’t get us wrong! You may enjoy this state too, but such a large dosage is not recommended!

While we are talking about effects, it is pertinent to mention that both kratom and marijuana’s freshness are necessary to get the right results. If you consume fresh, natural products, the results will always be a treat. However, old products may have impurities like dust, or they may be contaminated with moisture.

Effects Of Kratom Vs. Marijuana At A Glance

Another difference between kratom and marijuana is the time they take to create a difference. Kratom onset ranges from an hour to 90 minutes, while marijuana acts instantly. If you take kratom for energy early in the morning, you will feel the impact after an hour. In contrast, marijuana users feel instant sedation and relaxation over their senses for a few hours.

If you are looking for motivation, energy, and the clarity to make sensible decisions, kratom is the right choice for you! However, if you want to escape from the challenges of life and experience euphoria, marijuana may be a better pick. However, the legality of both substances must be checked according to your location before you indulge!

Legal Status Of Kratom And Marijuana in the US

Medical science does not offer much information backed by research to show that kratom is safe for consumption. However, kratom has the edge over marijuana as it is a scheduled drug in some countries but is legal in almost all of the United States.

You will find hundreds of online shops for kratom. Still, marijuana is available with subpar dealers and suppliers who do not check on quality, expiration, or date of production.

The Marijuana Or Kratom Debate Among Users

There are various social media pages and platforms to discuss the impact, onset, and consumption methods for kratom and marijuana. People who use kratom or marijuana are the best way to know the effects of these botanical compounds!

Kratom users do not have much scientific research to help them decide the best strain or even the dosage for each strain. Therefore, users share their experiences, and often you will see debates for marijuana versus kratom. So which one is better? The correct question will be, which one is better for you? There is no general answer as the effects of kratom vary with individuals, and marijuana will also impact every other user!

Before you decide what you want to use and which type of product is best for you, determine your desired results. If you are looking for focus, energy, and better output, then go for kratom. However, if you want to run on the wild side and want a euphoric and unfocused state of mind, it is marijuana all the way!

How To Consume Kratom And Marijuana?

There are many types of kratom products available online in the United States. You can choose between capsules, tabs, soft gels, tinctures, powders, and a whole lot more! For marijuana users, the choice is minimal as you may find crushed leaves to smoke, or some suppliers may offer capsules and pre-rolls.

Head shops and smoke shops make these products in limited quantities without any laboratory testing. Kratom products go through thorough laboratory tests and are processed carefully to bring you the end product with a production date and a ‘best before’ time.

Kratom and marijuana are natural substances that have a long history of use. The effects of kratom include energy, motivation, and pain relief, while marijuana is like a euphoric substance that moves your focus. Both the substances can act as analgesics, but kratom usage is safer as it is legal in most of the United States.

You can find hundreds of online shops for kratom while marijuana remains available in shady weed shops or head shops. Try out the substance that will give you the effects you desire, but remember to use fresh and safe products as it is all about health!