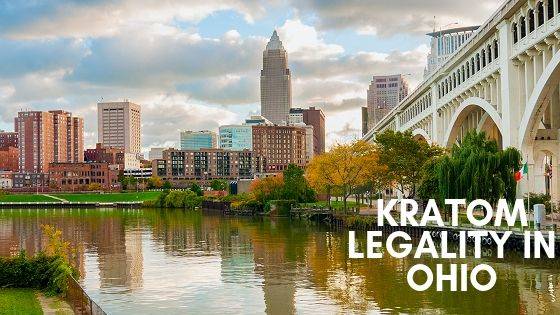 Kratom can easily be named as the most controversial drug of this decade. From getting on FDA’s radar as a “drug of concern” to DEA pushing the ban in 2016, the American public had a wild ride concerning Kratom legality these past few years.

Even now, you never know when and where it can get banned. News about banning Kratom in Ohio and other states is also circulating. It is like you talk about Kratom, and the issue of its legality is bound to follow.

Being a psychoactive drug extracted from a Southeast Asian plant called Mitragyna Speciosa, Kratom is still considered a drug full of so many mysteries. The government is pretty much confused about whether to keep Kratom legal until it proves to be more harmful or ban the drug until we can discover more about it. The most apparent reason is the much-needed scientific studies concerning its uses and interaction with other substances.

Taking into consideration that Kratom is already banned in quite a few states and cities of U.S. -namely; Alabama, Arkansas, Indiana, Tennessee, Vermont, Rhode Island, Wisconsin, Columbia, and Washington DC- it is entirely understandable if you are worried whether Kratom is legal in Ohio or not.

At the moment, it is 100% legal to use Kratom in Ohio. Though, selling it as a drug is carefully monitored and regulated in the state. The reason for it is the FDA’s disapproval to use it as a medicinal drug for any health benefit.

Mark Bruce, the spokesperson supervising the raids on Kratom stores last year, explained that any substance that is not approved by FDA as safe for human consumption could not be sold in either food or drug form in Ohio.

Despite this, Kratom is still available in the health stores and pharmacies as a herbal supplement in the form of a tea.

However, this was only true until now, as the ban of Kratom seems rather imminent -even as a health supplement- in Ohio, shortly. The law against Kratom use and possession is in its final stages. In the next month, there are speculations for the ban to be valid immediately.

Ohio Board of Pharmacy voted last year in 2018 to classify Kratom as a schedule 1 controlled substance -to be put in the league of Heroin, Marijuana, and other drugs. Due to massive public outcry, the decision got delayed up till the next month of September 2019.

The Joint Committee on Agency Rule Review was supposed to decide whether the law was complying to the rules of the Ohio General Assembly this week. Howbeit, public opinion won yet again, and the board postponed the meeting as hundreds of supporters gathered for the hearing in protest.

The main reason behind The State of Ohio Board of Pharmacy pushing the ban has been similar to the many concerns presented by the FDA a few years ago. Also, there were six deaths reported with “Kratom as a primary cause of death” in Ohio, along with the intravenous injection being the standard route of taking the drug has made Ohio Board of Pharmacy quite adamant about voting against Kratom legalization.

Since 2016, the previous FDA commissioner, Scott Gottlieb M.D., had waged war against Kratom and tried his best to list it in schedule 1 drug. He emphasized on the 44 reported deaths associated with Kratom use by 2017. FDA also called the Kratom “the drug of concern,” based on its various potential side effects and unknown drug interactions of Kratom with other substances. According to the press release,

“Importantly, evidence shows that kratom has similar effects to narcotics like opioids, and carries similar risks of abuse, addiction, and in some cases, death.”

Not only that but CDC also reported an increase of associated deaths from 26 to 263 with Kratom usage between 2010-2015. Further, people use Kratom as a treatment of diseases, which is not approved at all. These reasons have prompted FBA to put more efforts into influencing its legislation.

However, the only reprieve and the best news for Kratom supporters has been the resignation of FDA commissioner Scott Gollieth in April 2019.

Now, the question is, do the FDA’s concerns base on baseless assumptions, or is it all correct?

Well, American Kratom Association has wholly denied them as baseless facts. They call it as propaganda against Kratom spread by false news and wrong reporting of deaths. Most times, the cause of death is either wrongful use of Kratom or some interaction of the drug with a medicinal substance taken together.

Ohio Board of Pharmacy Hearings

Ohio Board of Pharmacy (BoP) first pushed for the Kratom ban in the state last year in September. They conducted a review with the help of 6000 received emails in only the first round. The second round involved almost 600 public comments to reclassify the drug.

Other medical bodies like the Cleveland Clinic and Ohio Chapter of the American Academy of Pediatrics are also in full support of the board to ban Kratom in Ohio.

The pharmacy board has defended its vote in favor of ban with the recent studies by Nationwide Children’s Hospital that says,

Even though the board has okayed the ban, it doesn’t mean that the prohibition will be effective immediately. It is supposed to take at least two months for the rule review agency, comment sessions, and all the hearings to finalize the law.

Typically, rules presented by any of the state agencies -including Ohio BoP- has to collaborate with stakeholders and involve affected public opinion. Only after that, the proposal can go through the Joint Committee on Agency Rule Review (JCARR) to start with the rule review process.

The public hearing was this Friday, which prompted the JCARR and Ohio BoP to reschedule the meeting next month. It has now given a bit more time to Kratom supporters and advocated to sort out some new strategies in the struggle to keep Kratom legal in the state of Ohio.

According to Bob Curtis who spoke in favor of Kratom in the hearing,

“I am just really pleased that they are listening to us and they’re going to go back through the testimony now and maybe reconsider.”

Many scientists and Kratom advocates are trying their best to support Kratom use and maintain it legal in Ohio state. They have called the claims by FDA and Ohio Board of Pharmacy as misleading and inaccurate. Their main argument is the most common and essential use of Kratom as a step-down or substitute treatment for more threatening opioid abuse.

They have also disproved the deaths in between 2016-17 that are said to associate with Kratom. The Kratom advocates are of the view that it is nearly impossible to overdose on Kratom and the deaths were the result of other substances taken together with the drug.

According to the chairman of American Kratom Association, Dave Herman,

“The FDA has ignored credible science that demonstrates that kratom has a very low potential for abuse and poses no risk to the public health for the citizens of Ohio or any other state.”

However, it all seems unlikely to move the Ohio Board of Pharmacy. Because, C.M Haddow of American Kratom Association, says that despite all the scientific evidence presented against FDA’s false concerns, the board is still adamant on banning Kratom in Ohio.

The association has even tried to settle on a middle ground. They have proposed some laws that will not only set a legal age for Kratom usage but also regulate the drug with proper labels and ensure quality products in the state.

Recently, the American Kratom Association opened a portal to receive emails and stories about how Kratom has helped with their health and well-being. They also called for the Kratom advocates to gather for the public hearing on 9th of August, 2019 arranged by the Ohio Board of Pharmacy. It looks like their efforts were fruitful, as hundreds of people gathered and the final decision towards the ban has been moved forward till next month.

Can You Buy, Sell & Carry Kratom Products in Ohio?

As of now, Kratom products are entirely legal to buy and carry in Ohio. Because of its various health benefits, it is readily marketed and sold in medicinal stores. Doctors are also able to prescribe it without going against or breaking any laws.

For selling, the rules are a bit complicated. Because even now, without any ban, Kratom can not be sold as a drug in capsule or pill form. Stores selling it as pain reliever are also liable to penalty and lockdown because of FDA’s disproval of Kratom as a treatment regime for any disease.

Further, claiming any health benefits while selling this drug is also prohibited. Ten stores were cracked down by Ohio’s law enforcement agency last year. Gerri Gerhardt, the chief of Ohio’s Division of Food Safety, explained that retailers can sell Kratom in powder form and that they are not stopping anyone from actually selling it. The only motivation for the raids was to prevent its advertisement as a genuine food supplement.

However, all selling and buying laws can change at once -if the ban proceeds next month in Ohio.

Where to Buy Kratom in Ohio?

These stores are spread out across Columbus, Cincinnati, Dayton, Sharonville, Cleveland, Barberton, and many other cities of Ohio.

Although buying from local shops is usually convenient, you never know what quality of Kratom you are getting. This makes it all the more necessary to look for customer reviews before deciding to buy Kratom from any vendor.

Now, this is where it comes to online sellers. Many of the online sellers guarantee 100% pure, naturally grown, and authentic Kratom exported directly from South Asia. Here are some of the best online vendors we know:

You can also find other authentic online Kratom sellers via either Google map or try the magic of online directories like Yelp, Yellowpages, manta, and whatnot. Though, don’t forget to look for online reviews first on websites like Guidancepa for authentic Kratom products.

Whether you are thinking of venturing out to purchase Kratom or order some online, before buying -make sure to do complete research and ask about all of the essential details regarding its dosage. Put enough efforts and time to find a reliable Kratom store and you are good to go.

We have already established the fact that Kratom is legal in Ohio only until now and you can find the law changed any moment soon.

So what does that mean for you?

The answer is simple. You can enjoy all of Kratom’s health benefit until it is legal. And hope for the best that Ohio Board of Pharmacy might put considerable thought in reviewing all the requests in favor of Kratom presented in last public hearing.

Though, if it does get banned in Ohio, you have to make peace with the fact that you can not acquire it without getting your legal status in jeopardy.

We all hope, whatever happens, is in the betterment for everyone.