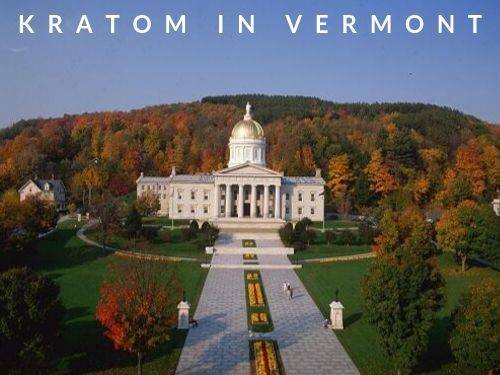 The growing popularity of Kratom due to its benefits makes people opt for the Southeast Asian herb and prefer it over the prescription drugs. The same goes its case in the state of Vermont, where supporters are highly distressed due to Kratom’s legality issues. The sprouting cases of dependence and death caused by Kratom have made the law-making agencies apprehensive. History has shown a consistent fight between Kratom activists and opponents.

Both of the groups desire to work for a better purpose, wanting to bring a positive change in the country. The advocates rant that Kratom has been a life-changing herb for them, helping them alleviate their chronic pain while the ones on the other side opine that the dangers and dependence issues revolving Kratom can take lives, affecting lots of families.

They fear that the overwhelming numbers of addiction caused by narcotics such as cocaine, marijuana and opioids can lead to a widespread epidemic.

Even though Vermont State has made a taxed sale of marijuana legal, its stance on Kratom remains otherwise. Although it is legal in most of the U.S, Kratom is still banned in some of the states and as such remains illegal in Vermont State.

Is Kratom Legal In Vermont?

Although Kratom is legal in some states, e.g. Washington, Pennsylvania, etc., its legal status in the state of Vermont has been the grey area since 2016. It was in 2016 when the MG and 7-HMG, the main active alkaloids of kratom were placed in the list of controlled drugs. The legislature has included both these alkaloids under hallucinogenic drug list as well as with synthetic cannabinoids.

The confusion about Kratom’s legality in Vermont arises because its alkaloids (but not Kratom) included in the regulated drug list. This leaves the consumers uncertain, and many of them take part in conversations on forums like Reddit, discussing whether this regulation refers to the synthetic alkaloids or the natural Kratom herb too. Quite many of them filed a petition against the ban of Kratom but all in vain.

Subsequently, most of the people who did not want to shun the use of kratom moved to another state.

What Makes Kratom Illegal In Vermont?

The Southeast Asian herb Kratom is indigenous to Thailand, Malaysia, Indonesia, Papua New Guinea and Myanmar. It is used as a powder in tea or coffee. Its leaves are chewed, brewed or smoked by the users.

The consumers observe that this plant had immense merits for people since times very early when people used to it for a flush of energy and strength to fulfil their high yielding work needs. It acted particularly as a tonic for labourers who had to work for long draining hours.

Ever since it is believed to add meaning to people’s lives and bring positivity to those who had become hopeless, it is widely known for its pain-relieving and stimulant properties.

Advocates also argue that it can effectively be used as an alternative to addictive products such as opioids, cocaine, marijuana and heroin.

However, the government and healthcare regulating bodies are highly suspicious about its safety and high abusive potential. The FDA has always been concerned about the effects of Kratom and reports that the plant has a very high risk and can often be fatal.

The FDA commissioner Scott Gottlieb stated in a press release that there is evidence of harmful opioid effects in Kratom. Regardless of whether there is a complete understanding about the effects of Kratom, its risk of intoxication due to overdose or concomitant effects with other drugs make enough ground for the agencies to keep the plant under-regulated drugs.

Kratom Law Rapidly Changing In The US

It is a routine practice of organizations like the Drug Enforcement Administration (DEA) to impose a ban on a suspected drug or supplement that has medicinal effects on the human body.

The DEA as such issued a warning about Kratom’s safety in 2005. Kratom advocates, however, opined that the DEA has failed to differentiate between natural and contaminated Kratom.

Later in 2009, nine deaths occurred in Sweden over a year which was attributed to the Kratom product ‘krypton’. This lead to the placement of the Import Alert by the Food and Drug Administration (FDA) in 2012.

The advocates defended this by stating that the product was contamination of Kratom with an opioid analgesic which was the active ingredient of tramadol (commonly prescribed analgesic).

They further said that none of the bans imposed on Kratom in the six states from 2012 to 2016 referenced a distinction between pure and impure kratom, sold by unverified vendors.

The FDA in 2016, requested the DEA to recheck its stance on Kratom after which the DEA passed a Notice of Intent in August. They have added the two main Kratom alkaloids mitragynine (MG) and 7-hydroxy mitragynine (7-HMG) in the Schedule I list, banning their use based on 33 deaths attributed to Kratom use.

This gave rise to a public outcry which forced the DEA to withdraw its notice after two months. The DEA invited people to put forward their comments and also asked the FDA for further analysis on the subject.

As the American Kratom Association (AKA) counts, more than 23000 people including professionals like doctors, lawyers and scientists, commented against the ban on Kratom.

This was about 99.1 % of the total commenters. Only about 100 were those who were in favor of the ban.

It was not until October of the next year that the FDA presented its 8-Factor Analysis (8-FA), requesting the DEA to re-schedule the Kratom alkaloids in the Control Substance Act (CSA).

Using a computer modelling tool in February 2018, the FDA reported confirmation of the notion that Kratom had opioid agonistic effects.

The agency remarked that the number of deaths caused by Kratom use had reached around 44 in about nine years.

This claim was, however, again rejected by Kratom supporters who backlashed that there were other causative factors in those deaths such as intake of other drugs with Kratom, other fatal medical conditions and the use of contaminated Kratom from discredited vendors.

The legal status of Kratom has been controversial news from state to state. There remains a consistent war between the government officials and ‘Kratom warriors’. The media is also made responsible for the seemingly ever-growing tension between the two parties. It is accused of propagating news and events without verification of its truthfulness or analyzing the resulting outcomes.

Max Karlin, spokesperson of Kratom Information & Resource Center states that there have been ongoing attacks which is the reason why they take this as a war. He further blamed the media for not acting responsibly for the escalating tension by propagating only the FDA’s anti-kratom perspective.

Denver Environmental Health prohibited Kratom’s sale in November 2017. This led David Kroll, North Carolina’s health journalist for Forbes as well as a Colorado Pharmacologist, to raise a concern about the ban. According to his scientific prediction, banning Kratom will cause more harm to people than saving them. Other advocates also fear that people would go back to using heroin if Kratom’s use as an alternative is prohibited.

One of the consumers, Nicholas Moodley, shared his experience of having chronic back pain since his teenage due to long working hours. This led him to use an opioid drug Suboxone as recommended by one of his peers. Following his friend, he later shifted to Methadone. However, sometime later, as he was introduced to Kratom, he was able to taper down opioids gradually, and it did work out for him.

Moodley’s experience makes him apprehend that Kratom’s alleged fatality is over-exaggerated and misleading. According to him, most of the causes of death are due to the integration of kratom with potent opioids or other similar drugs, and there needs to be more balanced and neutral research and law made for the herb.

How Suppliers And Users Can Act Responsibly To Stop These Ban State-Wide In The U.S.

Kratom users and vendors need to act very consciously as any unsought or careless action from their end can cause quite a lot of damage to Kratom world nation-wide. This includes users to be careful of the product they choose along with the dose they take. Users should verify the vendor and the product they are selling to avoid any untoward incident, to protect themselves and Kratom’s image as a whole.

As for the vendors, they should also invest in the purest and contaminant-free Kratom batch.

It is recommended that they have their product 3rd party tested and enlist all the constituents in it.

It is also advised that they include a dosage recommendation as a costumers’ guideline.

This ensures that it will not have any undesirable effects on the users and thereby will reduce the number of unwanted cases the agencies are hunting for.

Following campaigns, sending emails to legislatures as well as participating in the volunteer groups can reap more benefits if the users act responsibly. By this, they can succeed to stop the state-wide ban on Kratom.