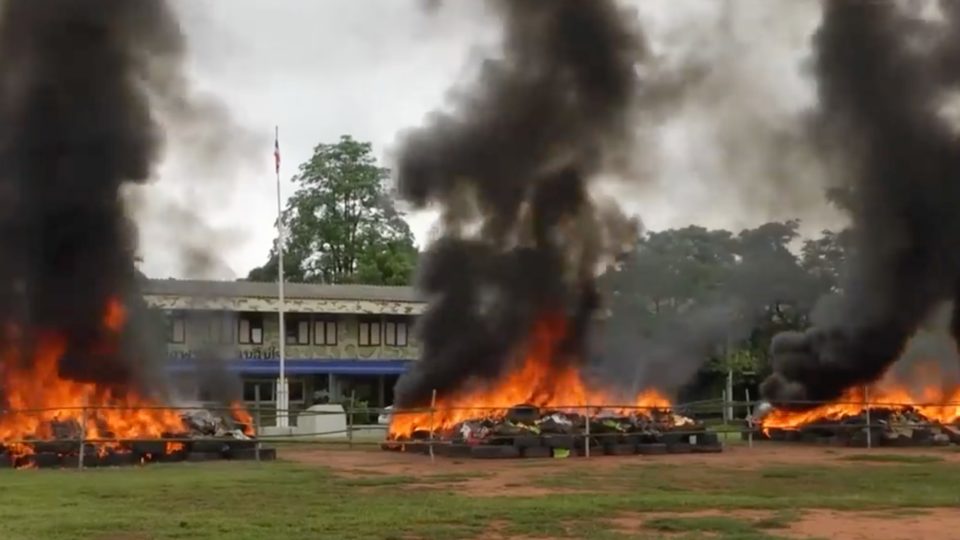 The Nakhon Phanom administration celebrated the International Day against Drug Abuse on 7 August 2019 by burning marijuana and kratom leaves in the province. This step was to show that the government and anti-drug forces would do anything to reduce drug abuse and eliminate the menace from society.

The kratom leaves weighed 67.3 tonnes, and marijuana weighed around 8.4 tonnes.

The bulk was collected through raids over the past year and torched in front of the Muang District Office. The celebration also included local campaigns against drug abuse.

According to a Thai newspaper, “From October 1, 2018, to May 31, authorities in Nakhon Phanom seized 7 million methamphetamine pills, 6 tonnes of marijuana, 29 marijuana plants, 19.3 kilograms of crystal methamphetamine, 67 kilogram of kratom leaves and 58 cans of glue used for inhaling. A total of 1,809 arrests were made in 1,784 drug cases during the period.”

Kratom is a plant growing only in the Southeast Asian region. It has a lot of health benefits such as pain relief, stimulation of nerves, and withdrawal from opiates. It was used as a part of botanical medicines in the past centuries.

Now kratom is exported to numerous processing units and manufacturers in the United States and Europe. However, the Thai government has become strict with all-natural substances and does not permit the use of kratom in its birthplace!

Kratom is defined as a drug by several health authorities due to little evidence of it being a health supplement. Users, on the contrary, sing praises of this natural supplement which allows them to quit high-degree medicines and liberates them from chronic pain.

Arthritis, joint pain, muscular spasms, and several other painful conditions can be treated with kratom, but authorities believe there is no consolidated evidence. The user reviews are enough for people to try kratom, and gradually, it is gaining popularity in the west.

Thailand is conservative in kratom allowance as the ban to use this botanical supplement was implemented in the 1940s. It was illegal to possess, sell, or use kratom in the state till December 2018, when medical marijuana and kratom were allowed for medicinal purpose.

Ironically, all the countries where kratom grows, such as Malaysia, Indonesia, and Thailand have banned the use of organic kratom while the west is adopting it!

The news of burning kratom was like an anti-climax after the state allowed people to use kratom and marijuana for medical purposes just last year. However, government laws clearly explain that it is not a leisure drug and cannot be allowed without a medical reason.

The province of Nakhon Phanom is a tourist destination, and therefore, the use of leisure drugs is also abundant in this region. You can easily find marijuana, pot, weed, hemp, and any drugs here, but this may be a problem for many visitors!

The police and anti-drug forces have become very vigilant during the past years, and the collection of kratom and marijuana was the result of repeated raids.

The message sent across with this fire is that people who cross the law limits will have to pay for it. Kratom and marijuana are not for everyone, and this message reached people that the government wanted to target.